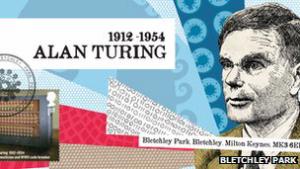 Alan Turing, the famous World War II code breaker, is to be commemorated on a new stamp issued by the Royal Mail.

The stamp will be officially released on February 24 and will be one of 10 designs remembering famous historical figures. The Turing stamp is especially fitting as 2012 marks what would have been Alan Turing's 100th birthday year.

Turing is one of our more famous local heros, based at Blethcley Park, he designed the Bombe machine and the Enigma machine which both played a huge part in the British war effort.