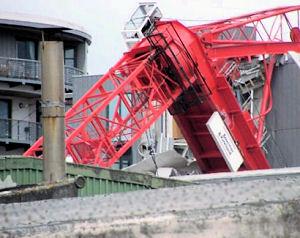 Bowmer & Kirkland and Bingham had both denied the charges following the collapse in July 2009 when the tower crane toppled onto an apartment block at Chandlers Wharf in Liverpool city centre.

The companies were fined £280k and £1k respectively for the accident where crane driver Iain Gillham, 55, from Woolton, fell from his cab onto the roof of the apartments and through the hole created by the counterweights.

For more on this story go to Construction Enquirer.

Huge Fine for Crane Collapse was published on 10 May 2012 in categories on the Ai Solutions Blog.
Previous Entry New HSE Publication: Managing asbestos in buildings May 10, 2012
Next Entry HSE Campaign Could Cost Industry £1.5m+ May 11, 2012