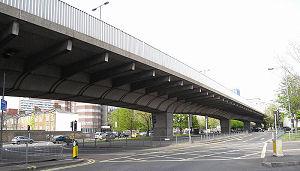 The Hammersmith flyover is closed for the week after serious defects were found in its structure. TfL (Transport for London) revealed that a "serious structural defect" on the Hammersmith Flyover, on the strategically vital London A4 route, has forced its closure.

Investigations are underway by structural engineers to gauge the full impact of the damage, meanwhile commuters will have been told to alter their journeys until a full report has been made.

For more on this story, including video footage, go to Engineers inspect Hammersmith Flyover damage.

Update: The damage was caused by Concrete Cancer.