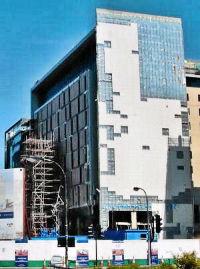 Whilst accident rates may be improving, breaking news of another tower crane collapse, this time in Liverpool (6 July 2009), suggests we still have opportunities for improving site safety. In the Liverpool accident the driver escaped with his life.

In the Milton Keynes scaffolding collapse on 11 April 2006, one worker tragically died and two were badly injured. The HSE has announced its decision to bring criminal proceedings against named parties involved. All parties were summonsed to appear before Milton Keynes Magistrates' Court ealrier this year. This particular item has raised awareness in Milton Keynes as new construction is high on the agenda with the new City's growth.

In 2006 the Health and Safety Executive (HSE) issued a safety alert to the construction industry following this incident. The warning aims to alert those working on similar projects to the importance of their arrangements to provide and maintain stable scaffolds. HSE recommends that those arrangements are reviewed regularly.

In this time of recession let us hope that Health and Safety is one area that does not suffer due to lack of funding or in adequate arrangements.