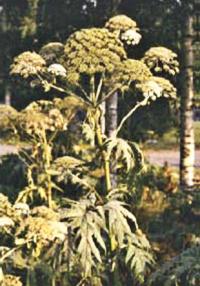 Giant Hogweed is a species of plant that is common in the UK along roads, footpaths and railway lines, rivers, wasteland, demolition sites and agricultural areas. Giant Hogweed is characterised by its size and may grow to between 3 and 5 metres in height. Individual plants can take up to four years to reach this height and flower. Giant Hogweed has a reddish purple stem and spotted leaf stalks, with fine spines that make it appear furry. The leaves may expand to 1.5 metres in width with flower heads commonly 250mm in width. Giant Hogweed produces approximately 1500 seeds per flower head in late summer. These seeds can remain inactive in the soil for several years. The movement of soil polluted with Giant Hogweed seeds must be carefully controlled to prevent the spread of the plant. When Giant Hogweed dies back during the winter months, it leaves bare ground.

Under the Wildlife & Countryside Act 1981/Wildlife (Northern Ireland) Order 1985 it is an offence to "plant or otherwise cause Giant Hogweed to grow" in the wild. This includes spreading the species or transferring polluted ground material from one area to another. Any Giant Hogweed polluted soil or plant material that you discard, intend to discard or are required to discard is classed as controlled waste and should be accompanied by appropriate Waste Transfer documentation.

Giant Hogweed contains a substance within its sap that makes the skin sensitive to ultra violet light. This can result in severe burns to the affected areas, producing swelling and severe, painful blistering. Large, watery blisters usually appear 15 to 20 hours after contact with the sap and sunlight. Damaged skin will heal very slowly leaving residual pigmentation that can develop into Phytophotodermatitis - a type of dermatitis that flares up in sunlight for which there is no straightforward treatment.

Contact between the skin and the sap of this species occurs either through brushing against the bristles on the stem (as with a stinging nettle) or breaking the stem/leaves. In the event of contact with the sap of this plant, the skin should be covered to reduce the exposure to sunlight and washed IMMEDIATELY and thoroughly with soap and water.

The two methods outlined below are the most effective control measures available in the time scale required by the construction industry.

Polluted material should be removed from the site for disposal, unless otherwise agreed with the Environment Agency and the Client. Any bags/skips containing Giant Hogweed or polluted soil leaving the site should be covered to avoid spread along public highways. Waste Transfer documentation will be required for any polluted material leaving the site.

Check with the disposal site in advance that they can receive material containing incidental contamination with Giant Hogweed. Disposal sites may require notice to allow an area to be prepared for this material away from the landfill liner. As Giant Hogweed is considered to be a pollutant, you can apply to Customs and Excise for a 'Landfill Tax Exemption' for disposing of polluted soil.

If Giant Hogweed is identified on site, it should be fenced off at a distance of at least four metres from the plants and the workforce notified of its presence and associated risks. Outside of the growing season, there may be little evidence of its existence other than the previous years dried, dead flower stem. If you suspect that there may be Giant Hogweed present on the site, you could check with the Client or the Principal Contractor. The Local Authority or local wildlife trusts may also have historical information. Alternatively, a specialist survey can be carried out.

Further information on the control and disposal of Giant Hogweed can be obtained from the DEFRA - Japanese knotweed, giant hogweed and other invasive plants.